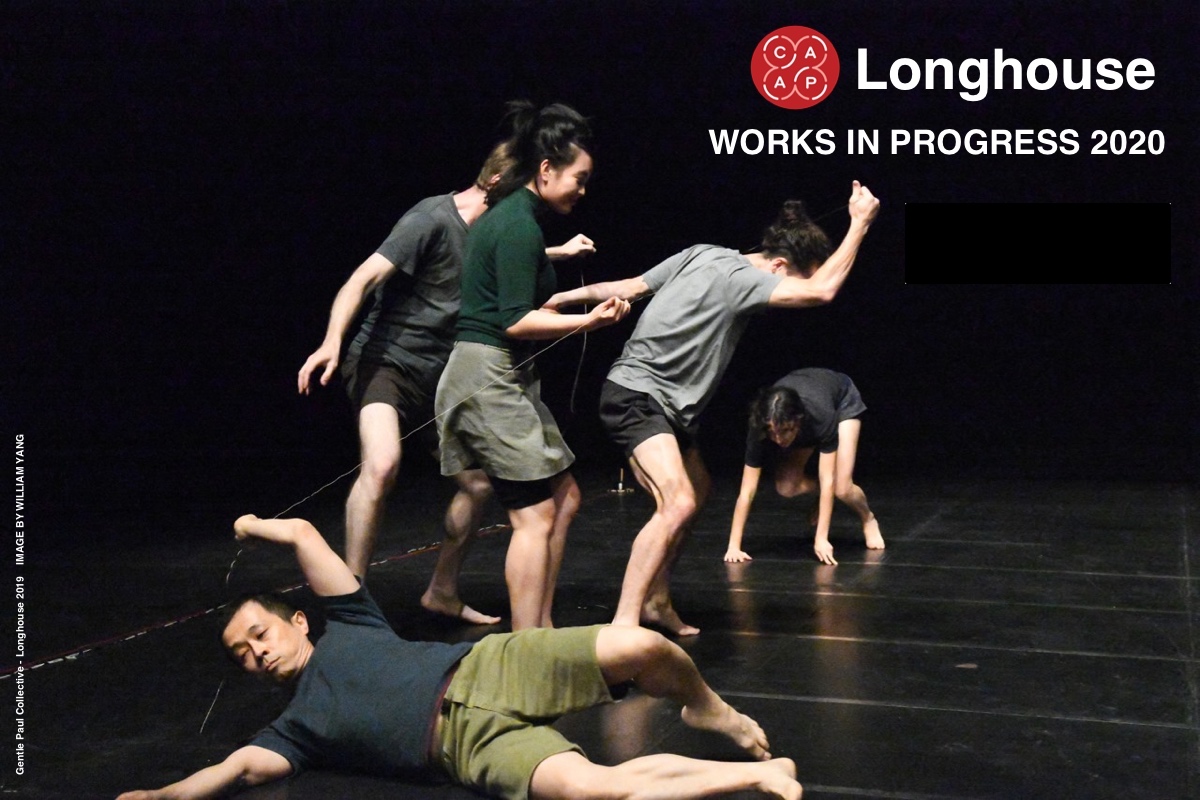 Bookings are now open for the final Longhouse of 2020 – the annual CAAP Works-In-Progress showcase featuring some of the freshest works in development by Asian Australian artists. We're delighted to announce this line up of exciting and diverse excerpts, spanning new writing, musical theatre, sound art and dance, performed live at our home venue of Carriageworks.

To ensure the wellbeing of patrons, Carriageworks is following strict guidelines set by the NSW Government and Live Performance Australia.  Please read their COVID-Safe Plan before visiting.  In line with these regulations we will NOT be offering networking refreshments. 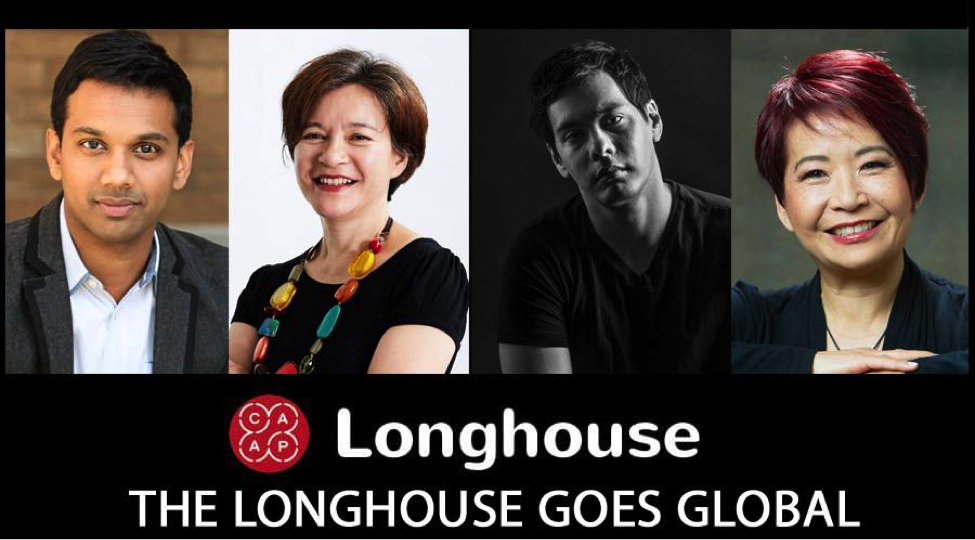 It’s been a big year for Longhouse. Not only have we moved the program online, we’ve gone national for the first time in May. Now, for our third Longhouse of 2020, we are reach out to fellow international practitioners in the Asian diasporic theatre community.

We have an extraordinary line up of panelists from across the oceans:

The panel will be discussing how they’ve been responding to this year’s challenges, new ideas, opportunities and ways of working that may have emerged. They’d also be sharing what it’s like running an organization that dedicates and advocates for Asian diasporic storytelling.

This event took place on Oct 10th.  You can watch the recording on CAAP's YouTube Channel. 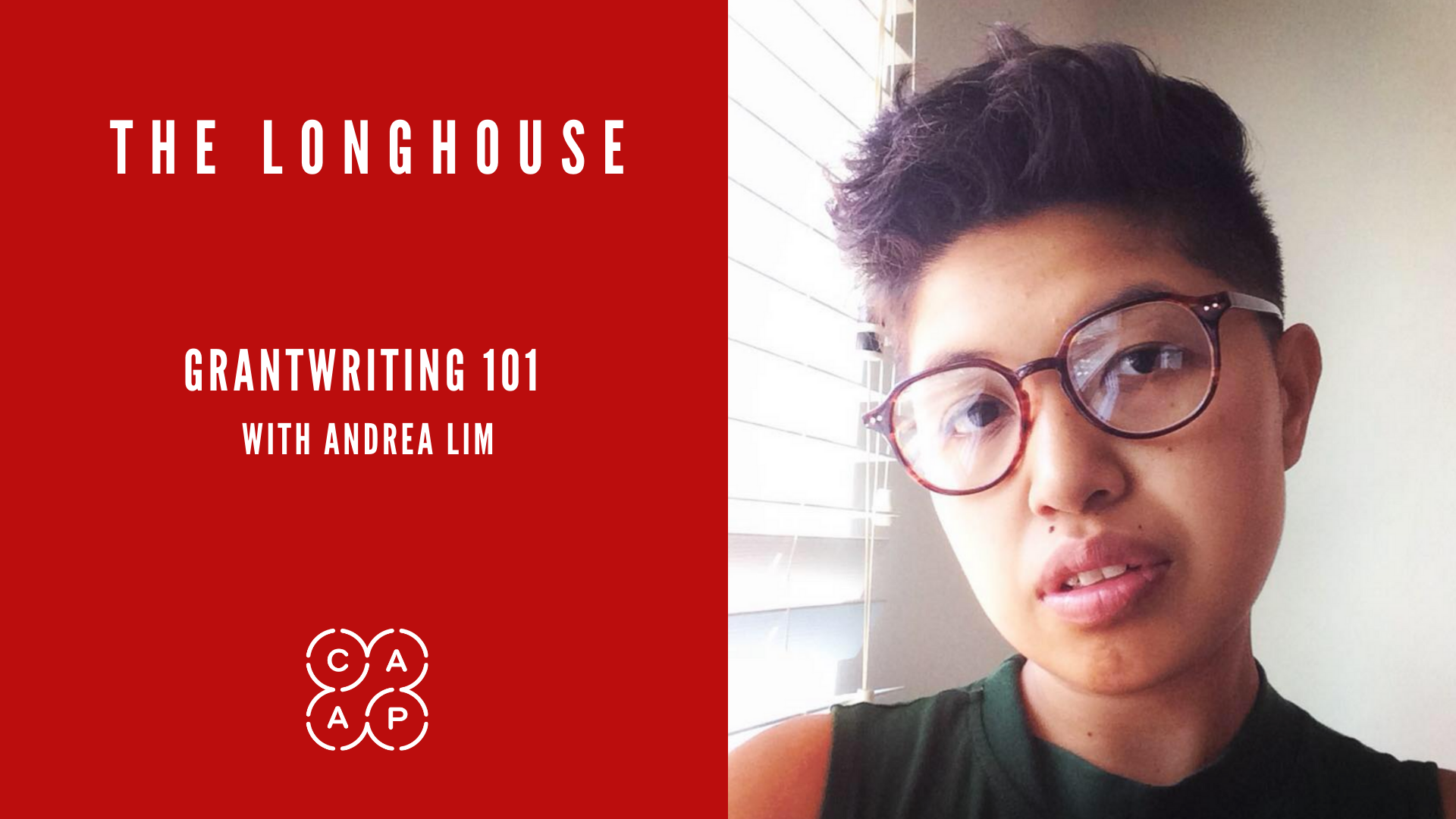 CAAP is thrilled to announce our second national Longhouse program: Grantwriting 101 with Andrea Lim, Friday 17 July, 4pm AWST, 5:30 ACST, 6pm AEST.
This workshop will be aimed at the national Asian Australian performance community, and cover types of grants, project preparation, grants integration and more. As we continue to navigate all the available funding opportunities, you’ll want to make sure your application stands out from the crowd.
You won't want to miss this rare opportunity to refine your grant writing skills.
Andrea Lim is a Sydney-based Singaporean born cultural and community development worker that is passionate about arts-based initiatives for social justice and creating alternative spaces for BIPOC emerging artists.Andrea generated a great response when she spoke at our first national Longhouse, The Longhouse Gathers, so here’s a chance to hear more of Andrea's perspective and learn more from her expertise.
Attendance for this workshop is free, however we encourage you to support CAAP's work by donation to our matched fundraising campaign if you can.
DONATE TO 100+ VOICES SPEAK
This event has finished 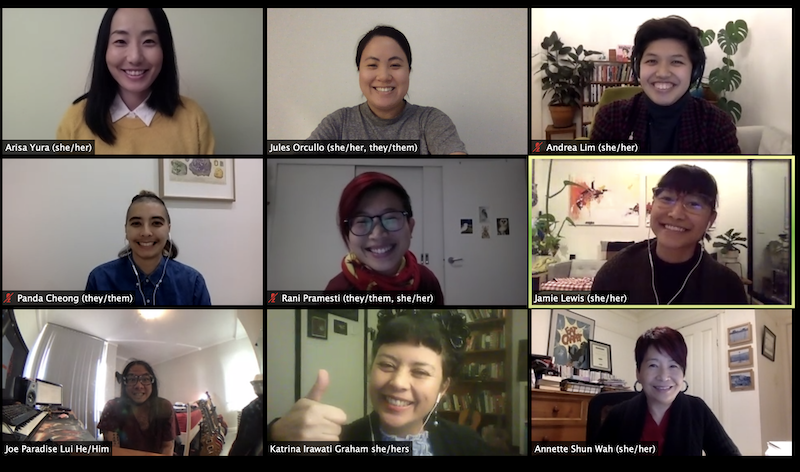 Thank you to everyone who came along to CAAP's first national Longhouse, The Longhouse Gathers, Thursday 14 May 2020. It was wonderful to see attendees from all across Australia. A special thank you to our special guest contributors: Rani Pramesti, Jamie Lewis, Andrea Lim, Panda Cheong, Katrina Irawati Graham and Joe Paradise Lui.

Below is a summarised list of resources provided by our guest contributors on the night: 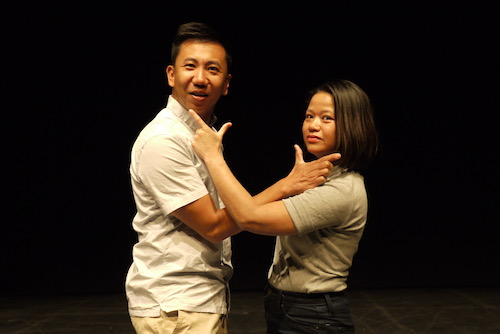 Since the Longhouse program was established by Contemporary Asian Australian Performance (CAAP) in 2015, it’s become a space of togetherness, sharing, and connection for Asian Australian people in the performing arts in Sydney, Melbourne, and Perth. Since then, we’ve seen the spark of new projects, collaborations, new conversations, and friendships.
The Longhouse is now moving online. This means we can keep the spark alive from our own homes - wherever you are around the country. So we thought we’d ask you: what kind of Longhouse program would you like to see?
Be part of the conversation about what the Longhouse will look like in 2020, and how we can continue building our Asian Australian performance community from here. Take this 5 minute survey and help create a Longhouse program that speaks to you. Step out of your iso-bubble and to stay connected with Asian Australian artists and arts workers from around the country.
Get your responses in by 21 April and you’ll play a big part in shaping CAAP’s first ever national Longhouse. (Stay tuned for details!). Any questions or concerns, shoot an email through to This email address is being protected from spambots. You need JavaScript enabled to view it.. 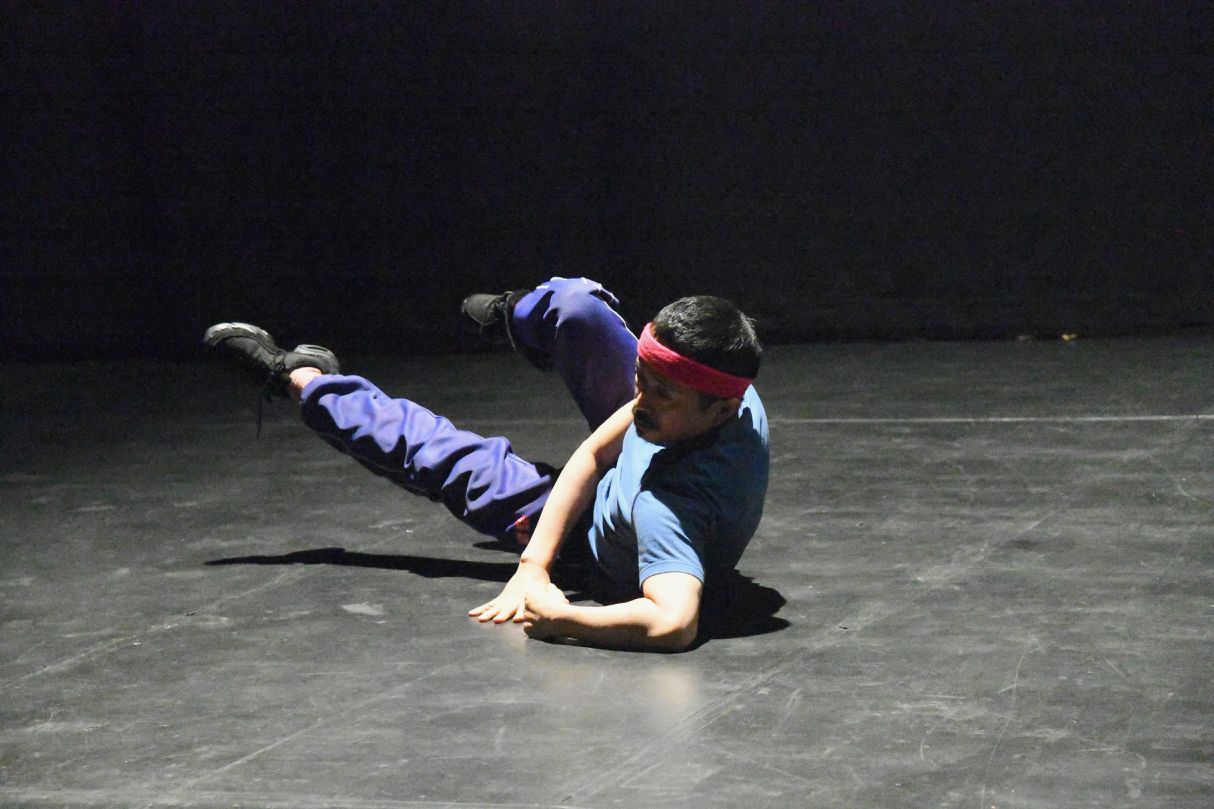 Join us for the final Longhouse of 2019 – the annual CAAP Works-In-Progress showcase featuring some of the freshest works in development by Asian Australian artists. We're delighted to announce this line up of exciting and diverse works, spanning new writing, improv comedy, sound art and dance.

The evening will conclude with the launch of CAAP's matched fundraising campaign, followed by networking, drinks, and nibbles. 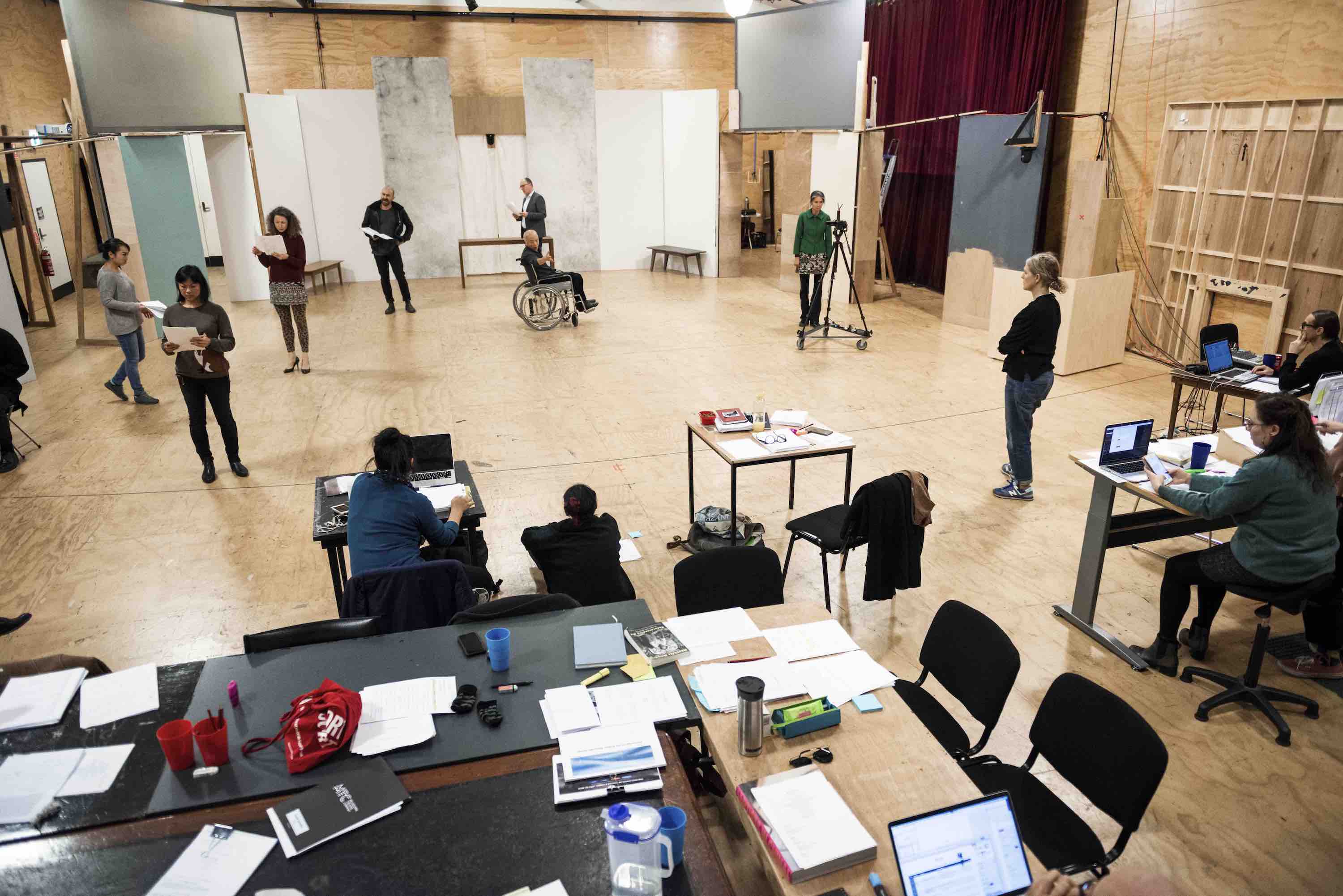 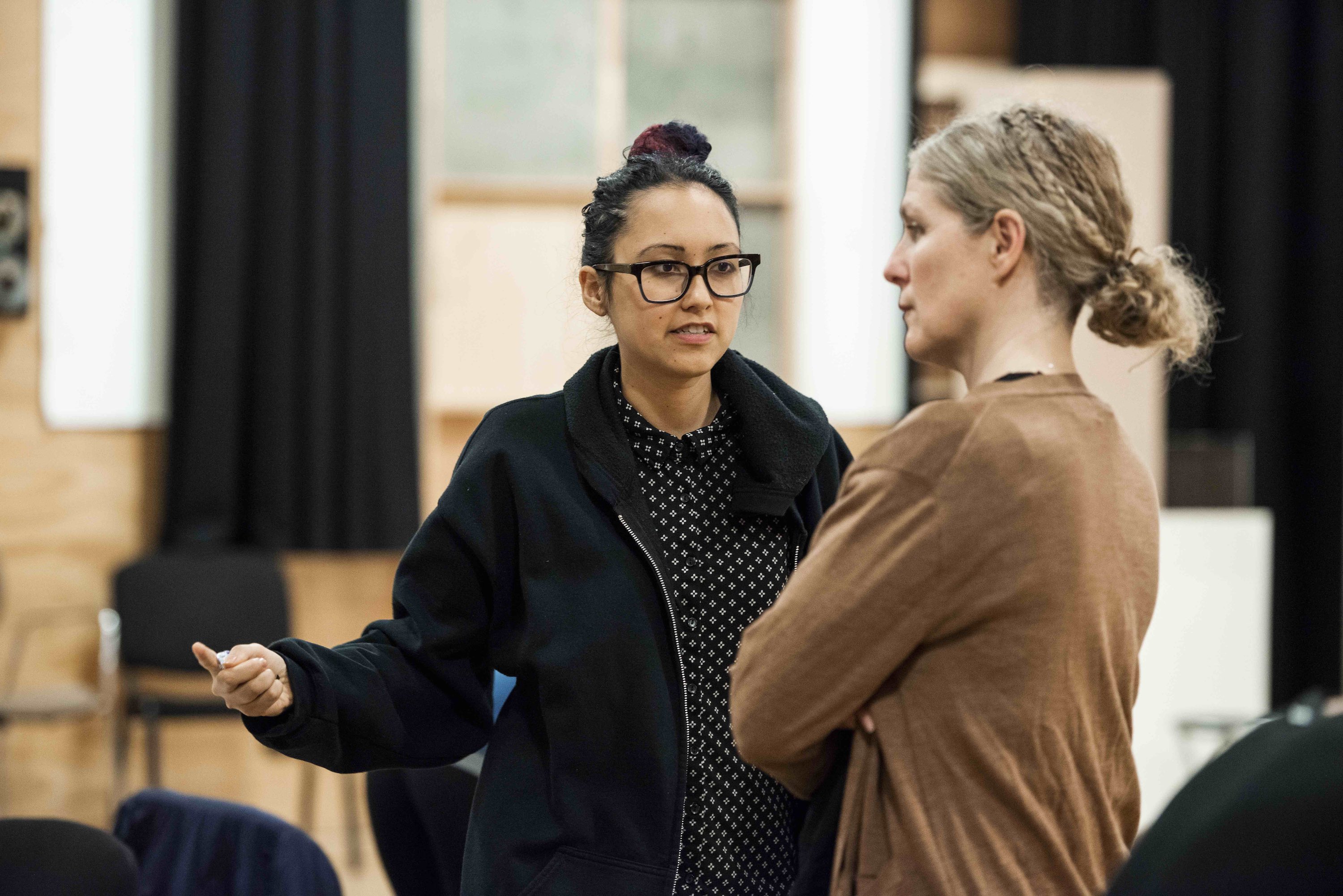 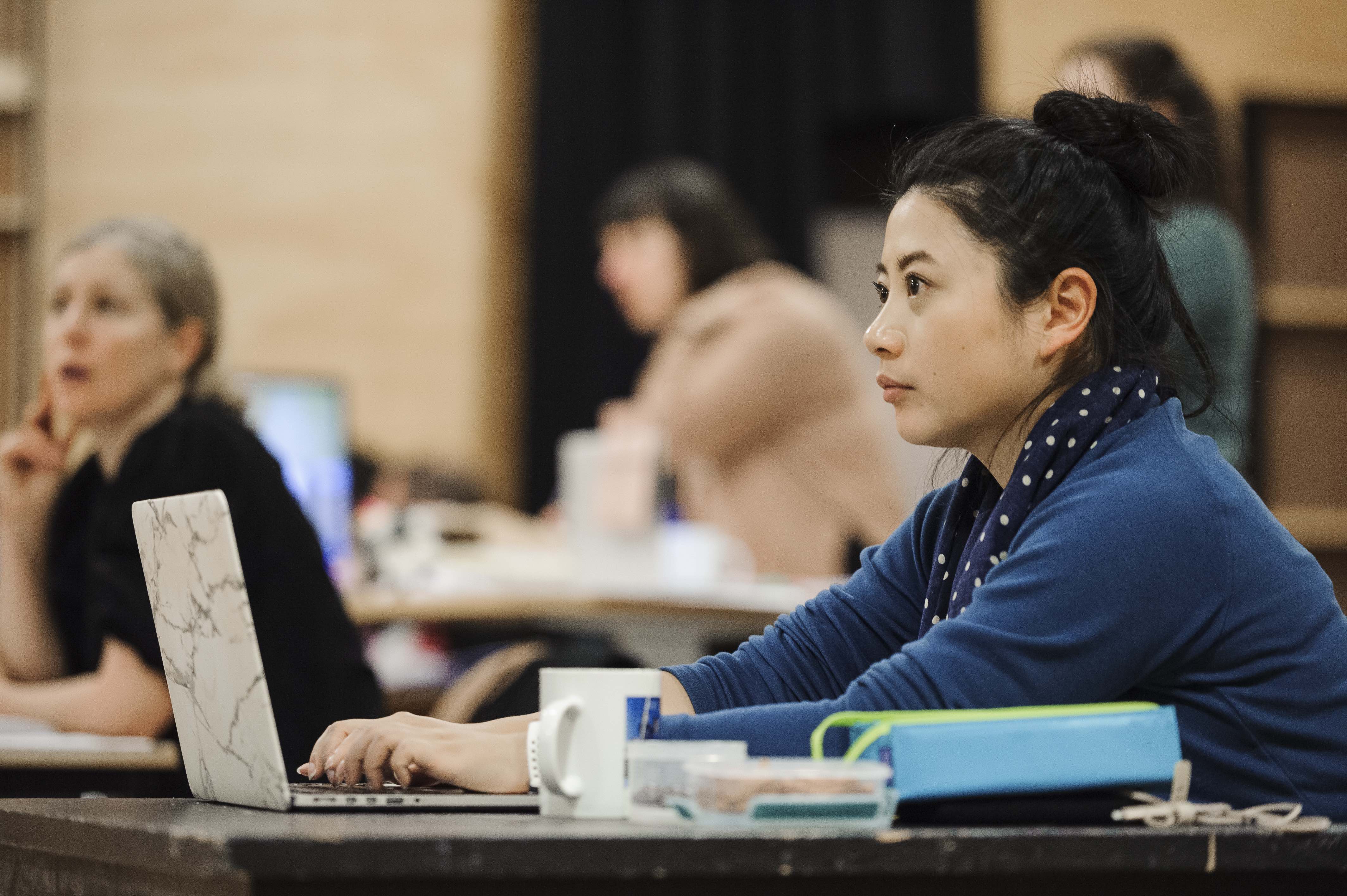 We return to Southbank Theatre's Lawler Theatre for the second Longhouse: Melbourne, celebrating their season of Golden Shield by exciting Asian Australian playwright Anchuli Felicia King. Hear insights from the show's creative team about bringing this incendiary new work to stage, and network with your fellow Asian Australian performance community. Panellists include:

The evening will be facilitated by CAAP director Diana Nguyen, and will feature a short video provocation by playwright Anchuli Felicia King. Tickets are available now. The panel discussion, including audio of questions and comments from the audience, will be live-streamed on CAAP’s Facebook page. 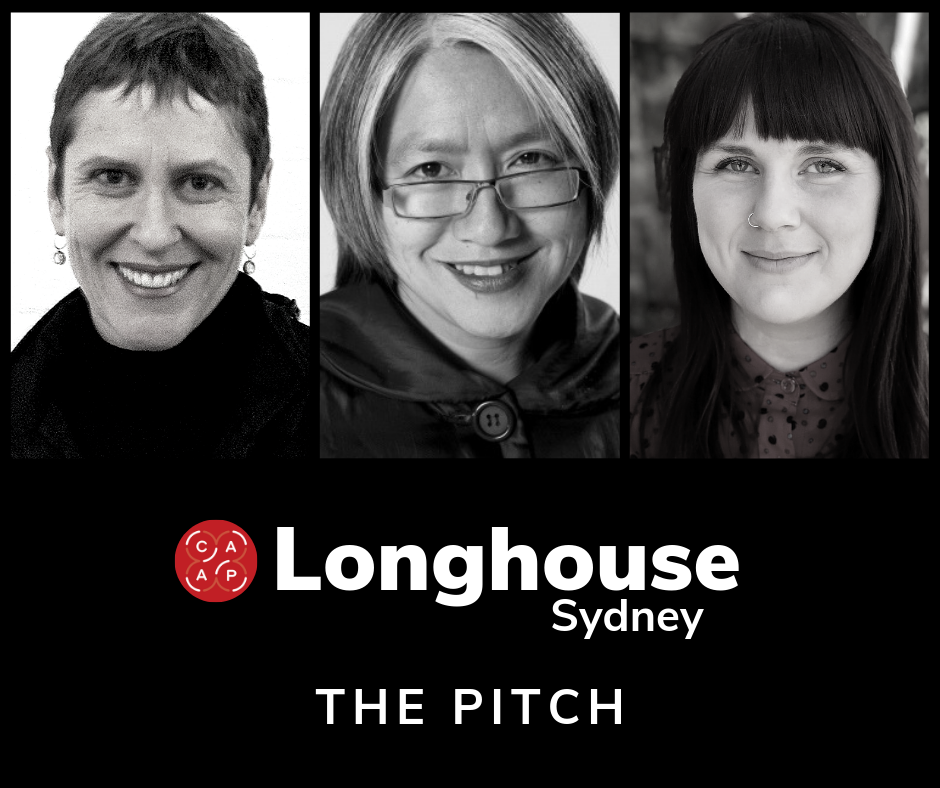 Sydney's Longhouse: THE PITCH gives you access to some of Sydney’s most revered producers who will break down the process of producing and pitching new works for stage and screen. Panellists include:

The event will be facilitated by actor and director Courtney Stewart. Prior to the event, 3 Asian Australian creatives will be selected take part in a free pitching workshop led by producer, Leila Enright, from Green Door Theatre Company. These three pitches will be presented at the Longhouse and receive feedback from our panel.

Expressions of Interest for the pitch workshop are now open for Asian Australian stage and screen producers! Submit your EOIs here by Monday 12 August.

This event has ended 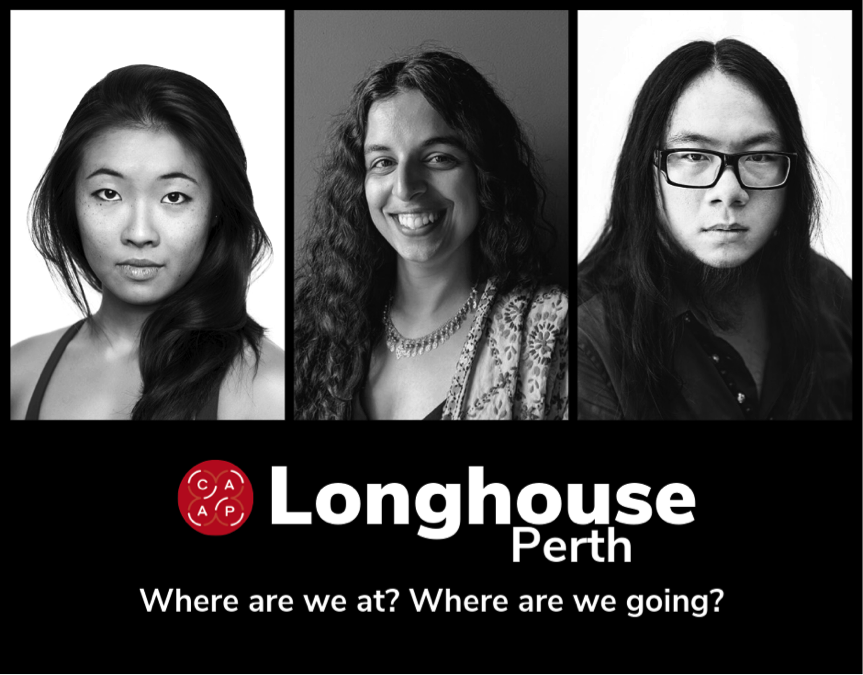 Join CAAP and BSSTC for our first Longhouse in Perth for an illuminating panel discussion about the past, present and future of the Asian Australian performance community in WA. With: 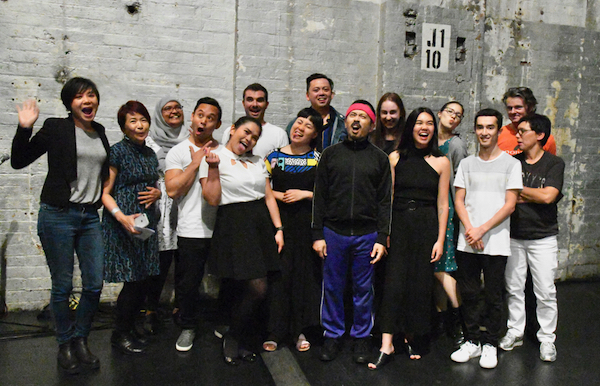 THE LONGHOUSE 2018 WORKS IN PROGRESS CAST PHOTO by William Yang

CAAP'S Longhouse is a meeting place to share stories, news, skills, ideas and wisdom.  Its aim is to foster a resilient Asian Australian performance community. In 2019 we're thrilled to announce a program that extends to Perth and Melbourne.

LONGHOUSE 1 : How to Get Your Work Up
Aimed at aspiring content creators in the Asian Australian performance community join our panel for a discussion about pathways and opportunities to get your work shown. With:

LONGHOUSE 2: The Pitch
A producing hothouse of sorts, THE PITCH gives you access to some of Sydney’s most revered producers who will break down the process of producing and pitching new works for stage and screen.

LONGHOUSE 3 : Works in Progress Showcase
Join us for the final Longhouse of 2019 – the annual CAAP Works-In-Progress showcase featuring some of the freshest works in development by Asian Australian artists.

We welcome artists from the west into the CAAP community in this very first Longhouse to be held in partnership with Black Swan State Theatre Company. Facilitated by Joe Lui this promises to be a lively and provocative panel discussion about the experiences of Asian Australian artists in WA.

We return to Melbourne Theatre Company's Lawler Theatre for the second Longhouse: Melbourne, timed to coincide with their season of Golden Shield by exciting Asian Australian playwright Anchuli Felicia King.