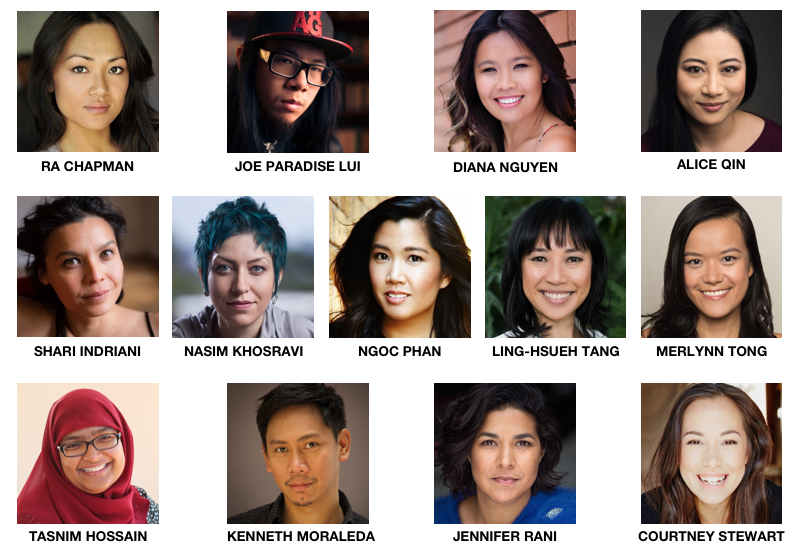 This initiative is the result of a powerful partnership between the four companies to identify, develop and provide career pathways for Asian Australian directors in main stage theatre companies.

More than 100 applications were received for the two-year program. After introductory directing workshops led by Paige Rattray at QT, Jessica Arthur at STC and Sarah Goodes and Dean Bryant at MTC, 13 emerging directors have been selected to continue in the next phase of the program. This entails a series of seminars, workshops, networking opportunities and placements to observe company productions up close. The following phase of the program will offer hands-on opportunities as assistant directors, directing creative developments and play readings.

Ra Chapman is an actor, theatre maker and writer. A 2018 Wheeler Centre Hot Desk fellow for her work on her first play K-Box. Selected for the 2018 Cinespace/Film Victoria Story Lab Program, and a member of the 2017 Besen Writers Group at Malthouse Theatre. She was a dramaturgical intern for Cybec Electric at MTC in 2017 and attended the CAAP/STC Directing Workshop in 2016. Acting credits range from Volpone (Wilton’s Music Hall, London) to the television series Wentworth.

Joe Paradise Lui is a founding member and the creative leader of Renegade Productions. Within its aegis he creates, writes, directs, designs and composes theatre and performance works that are thought provoking, socially conscious and push the boundaries of form and content. Based in Perth, Joe works as a writer, sound designer/composer, director and lighting designer. He is also a passionate educator and workshop facilitator.

Diana Nguyen has been performing and devising work in Australia for 13 years. She wrote and produced her own shows including her stand up show Naked, Phi and Me series (MICF), Viet Kieu (cabaret), Singing 10 ways to disappoint your Vietnamese mother, and has toured around Australia, USA and Edinburgh Fringe 2017. Her theatre credits include Melbourne Playback theatre company member, Tunnel Rat (Malthouse), Public (Big West Festival) and Silence (La Mama).

Alice Qin is a actor, teacher, and theatre maker. She trained at the Stella Adler Studio, New York. She apprenticed under Joan Evans and is certified to teach the Joan Evans technique of physical acting. Her New York theatre credits include Is It already Dusk? (Herald Clurman Ensemble/Irondale Theatre), Romeo and Juliet/Richard II/Love’s Labour’s Lost (Hamlet Isn’t Dead). Australian acting credits include Little Emperors (Malthouse) and the upcoming Atomic (Malthouse).

Nasim Khosravi is a writer, director and performance maker. She was born in Iran where she studied and practiced contemporary performance until her work was banned. She relocated to Brisbane, founded Baran Theatre, presented Vis and Ramin and Thin Air Brush at Metro Arts, and is developing a new work, Tower of Babel. Nasim is currently Assistant Director for Bell Shakespeare’s national tour of Julius Caesar.

Ngoc Phan is an actor and playwright. Recent acting credits include The Mathematics of Longing, A Streetcar Named Desire and The Village (La Boite Theatre Company); Pawno (Toothless pictures) and Australia Day (Hoodlum/Foxtel). She is Artist-in-Residence at La Boite Theatre Company where she is developing her first full-length play.

Ling-Hsueh Tang trained as an actor at the Queensland University of Technology and has been a regular on television series such as All Saints, Doctor Blake’s Murder Mysteries, Breakers and Top of the Lake: China Girl (BBC/Sundance Films). On stage she has appeared in productions by Griffin Theatre Company, La Boite, Living Room Theatre and Moor Productions.

Tasnim Hossain is a playwright, dramaturg and screenwriter. She was the 2017 Resident Playwright at ATYP, where she currently serves as a board member, and is part of MTC's Women in Theatre program. Her work has been staged by ATYP, Shopfront, 24:7 Theatre Festival in Manchester, Griffin Theatre, Fringe World in Perth and Crack Theatre Festival, Newcastle. She has worked with Goalpost Pictures and attended Screen Australia's Talent Camp at AFTRS.

Kenneth Moraleda is an actor, writer and director. His directing debut was an immersive theatrical/cinematic/live music show They Say She’s Different (Adelaide Cabaret/Melbourne Fringe Festivals). He was a leading artist in This Here. Land (Liveworks 2017). His numerous acting credits include Muriel’s Wedding – The Musical, Australian Graffiti, Cyrano de Bergerac, A Man with Five Children (STC), Australian tours of Australia Day and War Horse and upcoming, An Enemy of the People (Belvoir).

Jennifer Rani is an actor, director, creative producer and theatre maker. Recent credits include the ABC TV comedy Rosehaven, the stage production of Patricia Cornelius’ SHIT and a reading of White Pearl by Anchuli Felicia King at the 2018 National Play Festival. A recipient of an Australia Council Emerging Cultural Leadership grant, she was part of the team behind the inaugural WITS Festival Fatale in Sydney.

Courtney Stewart is a director, actor, dancer and teaching artist. She has worked on productions and developments of new Australian works including Single Asian Female by Michelle Law and A Ghost in My Suitcase by Vanessa Bates. She was Assistant Director on the STC production of Australian Graffiti, directed developments of White Pearl by Anchuli Felicia King and Barbaric Truth by Jordan Shea and was dramaturg on a development of Meat Eaters by Lewis Treston.